In past September, I designed a new weekly model and some new tools to investigate more deeply the quality of r.Virgeel’s model response. The results were really astonishing and have started a real revolution inside my approach to artificial intelligence and investing.

Three months later, after a huge amount of testing and experiments, the new weekly model is almost abandoned (well, it’s alive, partially), but many of the discoveries have been transposed in the “old” model and I may begin to share the results of the research.

I’ve always considered the Future Bars as my best benchmark: 24 bars (either daily, or weekly or monthly) in the future to map the “less improbable” path that the S&P 500 will follow in the coming future – it’s a big challenge, indeed! One of the new tools I’ve developed lets me test the behaviour of r.Virgeel in the past and a lot of surprises came in.

The response of the daily model is very variable, ranging from the nice precision shown in chart n.1 to the total failure shown in chart n.2, but what was more surprising was that r. Virgeel is much more precise during wave development and during intra-wave correction and totally wrong, usually, at turning points. I still have no idea of why it is so, but I’m sure it is a direct consequence of the fact that the market is a live thing, a really special living organism.

At first, this was a big delusion to me! But it helped me to separate the a.i. forecast output from the a.i. diagnostical ones (or the main other indicators that allow r.Virgeel to decipher the current market condition and to take position), that are much more affordable and precise. For the first time, I realized how the two things are deeply different in nature and how our expectations must be different on these two aspects of market analysis.

Then something surprising happened, and it was a revolution. I was revising hundreds of sample charts, when r.Virgeel suggested me to note its recurrent and inesplicable behaviour at market turning points: the FastTrack indicator took shape in a few hours and it is one of the best goals I’ve achieved, ever.

I was a bit upset, at the beginning, because I am a medium to long term investor and not a short term trader, while the FastTrack – it was clear since the beginning – is a tool for short term positions. Then I put it at test, as usual real time test, from its first long position on 30th of October: since then it has completed three swings up and three down, and is now in its seventh position (long), collecting a gross profit of 302 points (or 11.3% profit) from closed positions plus an open position that is gaining 108 points more, making the total profit up to 410 points or 15.4% of the initial capital. Of the six closed position, two were losing: one (long) was down 8 points and the other (short) 4 points.

It is a gross and theoretical profit, that must be adapted to the instruments used to invest, to position costs and slippage, but considering any possible drawdown, it is reasonable to say that you could have had a before taxes return of more than 10% in just one month, during a very difficult market condition (a deep correction inside a rising market). I will publish the complete positions record at the end of the public diffusion of the FastTrack, in about two weeks, but I’m sure that the readers that are following the blog are well aware of the goodness of the new indicator. It is precise, responsive, objective and totally deparametrized.

One of the consequences of the introduction of the FastTrack indicator is that r.Virgeel will soon be able to apply its model to financial instruments other than just the S&P 500: I’m working on it and I hope to be ready for New Year’s Eve to produce the FastTrack levels for the DowJones Industrial Index and for the Nasdaq Composite, and then for main stock market indices worldwide (DAX, FTSE, HSI, N225, …) and also for EURUSD, GOLD and others. I will need some time to prepare and verify the framework and the new models, and to modify the website to accomodate all these new informations – it’s a nice challenge – but the result will be a larger set of possibilities for us to approach the investing selection.

As a consequence of all the above, I have also realized that the standard one year subscription plan that the site offers since it was born is probably inadequate to host short term traders that have a totally different approach to the market, so a new one month subscription plan is now available, to let you test and evaluate if the r.Virgeel collaboration fits profitably with your trading habits. 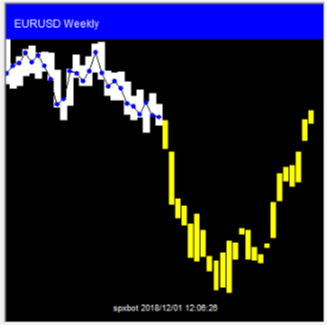 As I told you, the new weekly model is in stand-by, but I regularly update the database and verify its response to updates.

Today, it produced this chart for EURUSD, signalling a possible waterfall event with an Euro crash in the coming weeks, pointing to 1.035/1.05 area. As the European crisis is looming (Italy’s budget, France turmoils, Deutsche bank crashing – is it enough? ), the Euro seems destinated to pay the bill at a dear cost.

UPDATE – It was not yet ready to crash, but at moment the EURUSD is not in good shape anyway.