Latest days were hard. I do not mean bad, but hard. It was evident that the model was in crisis. Maybe the fact that the market is going into a never seen territory, or maybe due to its internal conditions, actually I’m not sure of the cause, but I was aware of the disrupted path that the forecasts were following. It was much evident in the bars projection, that is the most fascinating indicator at all. It sees the future. Most of the time it is tuned with the evolving waves of the market, but sometimes its sharpness lowers, it gets dumb, very volatile and undoubtedly less reliable. Sometimes, rarely, it even gets blind.

In latest days the model has given another  good indication and I suppose my subscribers are comfortable with the current position, The signal has developed in subsequent days, as due, and the position taken with a certain anticipation. All right.

No. Too much noise. Too much volatility in the forecasted bars, too much uncertainty in some of the other indicators. Signals were whispered and hard to decode.  Something was looming in the background that was invisible to the model and that was degrading its performance. It was time to intervene.

I have added a new module to the model. Brand new. So new that it still has not a real name, just a segment of code that stuff numbers into the model. Its importance takes the model to a new step, generating both more brute force and more cataloguing ability. I developed some test before, and it was not really impressive. It was just a partial application, then when applied extensively… whoo! It has drastically modified the output. Some testing has being done to explore the limits of the new element and the conclusion is that it stresses the model dimension to values never seen before and breaks a new record in the Amodel dimension. Some more testing is underway. Execution is smooth, the output is sharp and both daily and weekly charts seem nicely aligned.  Calculation time has risen reasonably. The addenda has probably shifted the bias of the network toward the short term, rising sharpness of this side of the forecast. It also should permit a better selection of the market status and reduce the smoothing process that the model undergoes.  I suppose it is a good result, overall.

My readers know that I do not like back testing, so we will see together if this new boost in the model capacity is worth the effort. The new component has boost the abilities of the model and we should obtain better cycle recognition, improved sharpness and more stability in the bars projection.

For obvious reasons the attached charts are available only to subscribers. 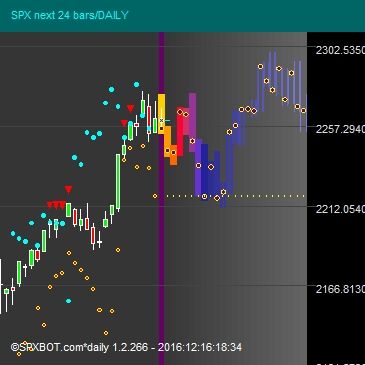 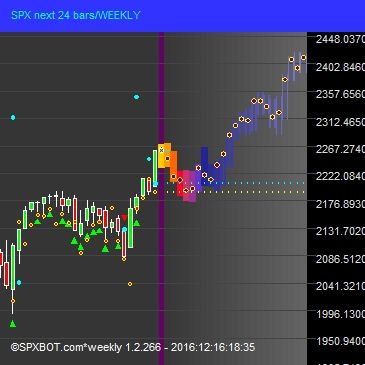 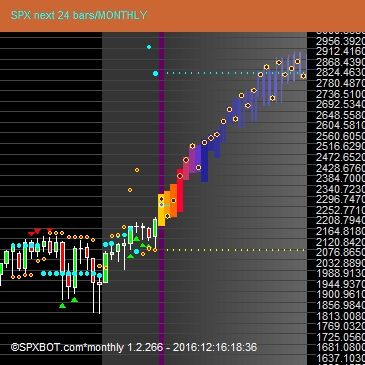